First radiofrequency ablation procedure on animal model has been performed in Kardio-Med Silesia on 16th of December 2016. New generation system based on 3D mapping technology has been used during this treatment. Surgery has been a part of first edition of practical courses organized by Clinical Electrophysiology School which has been created by Heart Rythym Branch of Polish Cardiac Society.

For the very first time in Poland cardiologist could be a part of workshop and had a chance to perform in practical electrophysiology surgeries under the guidance of specialist staff. Cardiologist also have been able to perform the surgery by themselves on animal model on high-tech system based on 3D mapping technology. So far, this type of workshops were available only in overseas medical centers e.g. in Minneapolis or Hamburg.

On theoretical part of first edition of Clinical Electrophysiology School the following lectures have been given: electrophysiology heart anatomy, advanced electrocardiography and treatment procedures.
The lectures have been declaimed by: Andrzej Libiński MD, Ph.D. Director of Cardiology Intervention Clinic of University Clinical Center name Military Medical Academy in Łódź; Łukasz Szumowski MD, Ph.D., undersecretary of state in Ministry of Science and Higher Education, cardiologist, electrophysiologist, internal medicine specialist; Jarosław Kaźmierczak MD.Ph.D., national consultant in field of cardiology, Director of Clinic Electrophysiology in Cardiology Department in Independent Public Central Clinical Hospital number 2 in PUM in Szczecin.
The second part of the training was dedicated to a practical workshop in a ‘wet lab,” where they could observe the effects of applying an electric current RF to the heart muscle. As part of the training, the participants also observed procedures conducted by experienced electrophysiologists and discussed topics pertaining to various techniques used during the ablation procedures. The training ended with procedures performed on animal subjects using a high-tech system based on 3D mapping technology.
Heart related conditions are the number one cause of death in Poland. Many of them are caused by abnormal heart rhythms – arrhythmia. One of the more serious conditions caused by arrhythmia is atrial fibrillation. It increases the chances of stroke by five times and if not treated, it can cause serious health conditions including death. Ablation is one of the most effective methods for treating atrial fibrillation. Experts state that in Poland ablation is still not used very widely. There are not enough qualified cardiologists; however, the situation is getting better as more and more doctors are pursuing training in electrophysiology.
Ablation training was performed in Zabrze using an electroanatomic system called Ensite Precision – a new generation equipment that allows complicated ablation procedures to be performed in much shorter time therefore making the surgery safer. The system offers the ability to create a geometric 3D heart map while simultaneously creating a map potential of heart structures. Analysis of the results allows precise identification of arrhythmia origins as well as the target sites.

System Ensite Precision, which premiered worldwide in July 2016, is a new platform allowing for automatic, flexible, and precise heart mapping. The system was designed to reduce the time of the procedure, provide ease of use, and allow for more effective treatments of patients. 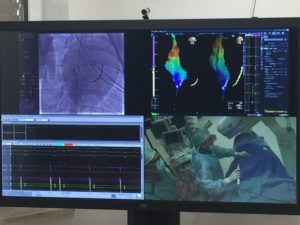 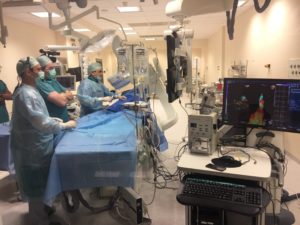 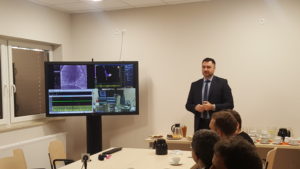 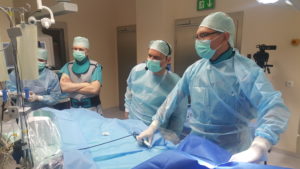