The V edition of International Conference MedTrends – European Forum for Modern Health Care took place on 5.12.20219 in Zabrze. The conference was organized by Silesian Park of Medical Technology Kardio – Med Silesia (KMS). The co – organizators were: the SIlesian Center for Heart Diseases, the Foundation of the Silesian Center for Heart Diseases and the Zabrze City Council.

Lectures were held at te headquarters of the SIlesian Center for Heart Diseases in the in the hall of the name of professor Religa. The Forum started on December 5 at 10:00 a.m. and ended at 7 p.m. Over one hundred people attended the conference. Among the participants were doctors, nurses, physioterapists, business representatives, representatives of local authorities and students. Participation in the event was freee.

Gathered guests were greeted by: Adam Konka – the chairman of the board of Silesian Park of Medical Technology Kardio-Med Silesia, Professor Marian Zembala – the Director of the Silesian Center for Hearth Diseases and Jakub – Chełstowski – Marshal of the Silesian Voivodship.

The conference’s program included many interesting practicioners’ lectures. Experts presented issues related to innovations, problems and challenges in the modern health care in Poland and in Europe. In the four sessions broached the following topics:

– Silesian ecosystem of medical and biotechnological startups – where we are and where we are going?
– Presentation of the startups that had won awards or had been honored within the confines of TopTrends competition (MedTrends Conference) from 2015 to 2018
– New solutions dedicated to diabetology, the problem of hard to heal wounds, ophthalmology, cardiology, cardiochirurgy and pulmonolgy.
-Bio-print, 3D – print, reconstructive and personalized medicine.

At the end of the conference creators and owners of innovative startups from the health care industry had the opportunity to take part in MedTrends competition – TopTrends – Competition for the best startup in health care MedTrends 2019. Out of 12 submitted startups, the following projects were qualified to the final session:

Out of 5 showed during the conference projects, votes of the jury the winners of the V competition TopTrends were:

The sponsors of the conference were the companies: ADAMED, ANMAR, BALTON, GABOS SOFTWARE. 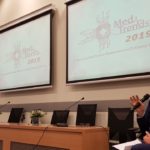 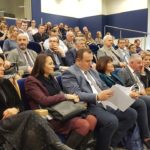 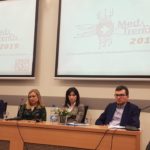